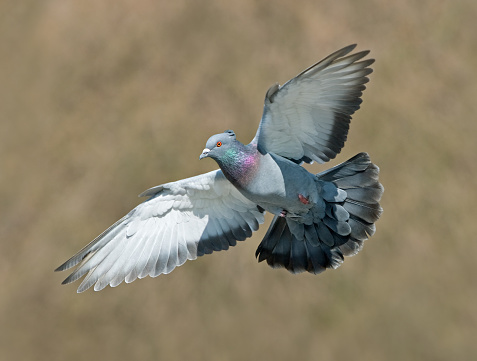 Pigeons are intelligent, social omnivore birds with excellent hearing ability, sense of smell and great vision that have been used as great messengers and spies by armies

Pigeons are omnivore birds found all over the world with the exception of the Antarctica, the high Arctic and the Sahara Desert. However, they tend to be more common in coastal areas.

Pigeons are believed to be the first domesticated bird in the world, with history dating back as far as 4500 BCE in modern Iraq. They are highly sociable animals. They will often be seen in flocks of 20-30 birds.

Members of different religions feed pigeons for spiritual purposes. These include Muslims, Hindus and Sikhs. In Christianity, the dove, similar to the pigeon, represents the Holy Spirit and is a symbol of peace.

Pigeons have outstanding navigational abilities, using a range of skills, including an internal ‘magnetic compass’, the sun and landmarks as signposts to navigate their journeys. They can find their way back to the nest thousands of miles away, even if they have been transported in isolation—with no visual, olfactory, or magnetic clues.

People have used their navigational skills to send them on errands miles away. They can fly at altitudes up to and beyond 6000 feet, and at an average speed of 77.6 mph.

These skills have been exploited since the 5th century AD with Syria and Egypt operating efficient pigeon courier services. Also, the Ancient Olympics results were transmit by pigeons, and the great Genghis Khan used pigeons to stay in touch with his allies and spy on enemies.  They were also used to deliver the mail, especially between New Zealand and the Great Barrier Island in 1896, when there was a great need for messaging services between both locations.

During the World Wars 1 and 2 some armies trained large flocks of pigeon messengers to deliver critical updates. These pigeon postal services were used to save thousands of human lives during the two great wars.

A French pigeon, named Cher Ami and other pigeons, during WWI, were used by the U.S. Army Signal Corps to deliver messages to other troops stationed in the area. Cher Ami delivered 12 critical message to the American sector in Verdun. On his last mission, it was shot by the enemy but still managed to carry its message for 25 more minutes with a message attached to the wounded leg that was crucial in saving of 194 stranded U.S. soldiers. It was sent back to the U.S., where he died on June 13, 1919 as a result of his wounds.

Another pigeon, named G.I. Joe, was credited with alerting British troops that an Italian town they were occupying was going to be bombed. This led to the troops been were saved, just with five minutes to spare.

Pigeons were honoured by both the French and British governments for their services during the wars. Cher Ami was given several awards including the French Croix de Guerre and a gold medal from the Organized Bodies of American Pigeon Fanciers. It was also inducted into the Racing Pigeon Hall of Fame in 1931.

Pigeons were also used by the Rothschilds families in the 1800s to carry financial communication back and forth, to gain advantage over competitors.

Other amazing facts about the pigeon:

Studies have found that pigeons, unlike most other birds on the planet, can recognize themselves over a photo of another pigeon. They were also able to differentiate among humans when looking at photos.

Other studies have shown that they can also recognise each letter of the human alphabet, differentiate between photographs, and even distinguish different humans within a photograph. Pigeons have also been trained to use their knowledge of impressionism and cubism to recognize the paintings of Claude Monet and Pablo Picasso and to distinguish between the painters, identify paintings of other artists in those movements,  distinguish watercolor images from pastels.